December 7th 2014 was a perfect day for an Ironman triathlon event in Busselton.  Conditions were very good with relatively smooth seas for the swim around the Jetty, then light winds and mild temperatures to accompany the athletes on the two lap bike course. As the easterly wind dropped away the temperatures climbed to the mid to high twenties. Fortunately it was not long before the sea breeze came in to provide some relief for the runners.

Preparation over the last four to five months was a mixed bag for each of these athletes. It is always a fine line between managing training loads with injury concerns, work and family commitments.  Peter and Nigel have spent a considerable amount of time working away with limited training facilities. Henrietta, Katherine and Belinda have a cricket team of kids between them which keeps them very busy, not to mention their work commitments.  Alison, recovered from multiple surgeries and has a super grown-up job which places enormous demands on her.

A recent calf injury prevented Alison from even tackling the run because she has a few more IM events to do in the next 12 months. She did a PB in the swim (1 min) and cycle (20 minutes). Alison’s approach to this day was to race as if she planned to run.  All in all a great training exercise. We were happy.

Henrietta and Belinda both had had interrupted run preparations which became evident in the later stages of the marathon. Both women were pretty content with their swim bike combinations.

Peter’s day was very eventful with a slow leaking tyre to choking on an inhaled fly with very unpleasant repercussions. Nigel had a great swim (as expected), a decent cycle (also as expected) and (for him) a disappointing run with significant cramping along the way.

For Katherine, the planets all lined up. A strong swim (12th in her division), 5th off the bike with a very controlled ride. At the start of the marathon, Katherine was just over 20 minutes down on the leader. We planned on 5 min / km to give her close to a 3:30 run. We knew that the leading woman would not break 4 hours.  Well, we were pretty sure she wouldn’t! To her credit, Katherine did not panic. She started strongly, and maintained the desired pace for the duration.  She took the lead in her division in her first Ironman triathlon with about 3 km remaining and won by the smallest of margins, just two and a half minutes.  There was great excitement all around. Looks like another trip to Kona.

Congratulations to all six of our athletes. Just to get to the start line is a great achievement. Alison will get her chance to finish IM #2 in Melbourne in March. For Peter it was his 10th Ironman. Incredible. For H and Belinda, both already with a couple under their belts, will have better days in the future.  Nigel Coles, YOU ARE AN IRONMAN. You couldn’t say that yesterday morning. And finally, Katherine, whose dedication over a very long time has paid off in the nicest of ways. You get a trip to Hawaii and do it all again.

Thanks to friends and family members who came and supported our people. It was greatly appreciated.

For a full set of results follow this link. 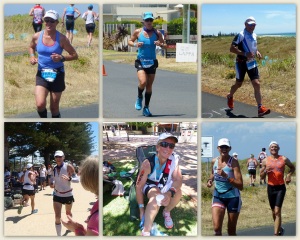