Well we are finally on our way to Davis and settling into the routine of shipboard life. 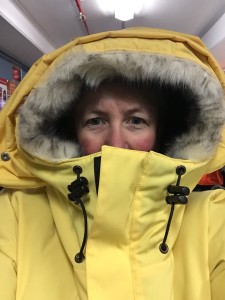 The final day in Hobart was full of inductions, safety briefings and goodbyes to people.  We finally left the dock and started steaming down the Derwent at about 8:30 pm after a delay of 1.5hrs to make sure someone (me) who fell down the internal steps before we even left port was ok and 2 hours for a blown pump gasket.

I was a bit battered in my fall and had to see the doctor.  I managed to catch the tread of my hiking boot on the edge of the stair and then stumbled/fell two or three steps and hit my left side on the metal boot rack at the bottom of the stairs.  A scrape along my left side, some bruises and sore ribs were the result.  I saw the doctor and he ok’d me continuing on the voyage, but I had a few nervous moments.

Most of us were in bed by 9 pm on the first night, a combination of tiredness and the preventative sea sickness tablets.  Even an announcement that the Aurora Australis (the real one, not the ship) could be seen didn’t managed to stir our cabin out of their bunks.

I am in a cabin of 3.  It is pretty small, but has its own shower and toilet and enough storage that most of the bags are out of the way.  Fortunately my cabin mates are both called Sandra so my notoriously poor memory for names is not being too badly exposed.  However, the names of the other 89 expeditioners is still pretty hazy.

After a relatively calm night, those who weren’t confined to their bunk by sea sickness used the day for some R&R, lots of reading, cups of tea, time on deck chatting and watching movies –  punctuated by meals.  There is just way, way too much food on this boat.  Vats of Tim Tams by the tea making station are not helping at all.

Day 2 the weather started to get a bit rougher and Saturday evening the ship was starting to pitch.  Those who have been south before say it is nothing, but to the first timers it is pretty impressive to see the Southern Ocean in a 40 knot wind.  We are lucky enough on the Aurora to be allowed to spend time up on the bridge and it is a great spot to watch the ship drive into the swells.  Also a good spot to watch the Albatross’s that are already following us and the Petrels.  It is really helpful that there are about 10 bird specialist on the boat who can point out the differences in the birds and tell us what they are.  Since then we have had remarkably calm seas.  However, there is a prediction for some rougher weather coming Wednesday 2nd of November in the evening.

Everyone is starting to get their routines.  I am trying to get up and go to the ‘gym’ in the morning.  The ‘gym’ is two rooms, one with a spin bike, x-trainer and rowing machine and a second with some treadmills, weight machines and dumbbells.   They are both about 3m x 3m and require a bit of co-ordination.  Using the x-trainer is a whole of body experience when it is moving through 360 degrees.  I might leave the treadmills till we are in the ice and the ship stops moving about so much.

Today we start our field training.  We do an hour and a half per day on various topics like navigating with a GPS, ice craft, polar medicine etc. till we arrive.  This should be quite good value.  The field training officers seem a pretty knowledgeable bunch, mostly from NZ strangely.

It is interesting being around your ‘client’ all the time.  In some ways you feel like you are being assessed/watched the whole time.  I know it is probably just my imagination, but it is something I need to get over, as it could be very wearing over a six month period.

My ribs/side are fine.  A couple of bruises and one sore spot on my ribs, but otherwise ok.

Anyway, I’d best get back to it.  I am writing stuff for my blog, but can’t upload anything till we arrive at Davis.  So there will be a big burst of information and photos sometime around the 12th of November if we don’t get stuck in the sea ice.

If you want to track where the ship is and look through the webcam to see the ocean conditions you can do that by going to the AAD’s website.  I think it is www.aad.gov.au and follow the links from there.

Talk/email you all soon,
Alison.