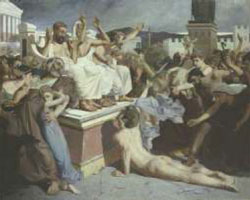 Legend has it that Pheidippides, an Athenian solder, ran 40km from the battlefield at Marathon to Athens to announce a Greek victory over the mighty Persian military in 490bc.

“We are victorious” he yelled (in Greek, of course) and then collapsed and died.

I know how he felt; after crossing my first marathon finish line yesterday I looked down the hill towards the recovery tent and said under my breath “you’ve got to be kidding me – down a hill?” (Throw in a few swear words for an accurate account). Note to the organisers – after running a long way your legs don’t like walking downhill. In fact, they protest furiously, sending out pain messages to every fibre on your being until you have to give in and sidestep down the hill as if you’re on the side of a snow covered mountain with skis on your feet.

Downhill details aside, yesterday’s marathon was, for me, another beautifully organised Perth sporting event, manned by amazing volunteers who gave endless encouragement every step of the way. My favourite volunteer is my lovely friend TP (you all know her as Tracy) who dished out such gems as “I don’t know about you guys, but I’m really feeling this hill in my legs” as she RODE up it, and “hey look, the 12km marker – only 30km to go”. TP also dished out treats like ibuprofen and mini-cokes as required and took happy snaps to remind me later that I really did do it and I looked like I enjoyed it. That kind of encouragement and support is what gets you across the line. That, and a great coach (cheers Carol) and friends like Cle who say “Tamz if you need to run early on Sunday because you have to get to work we can start at 6” That’s 6 AM everyone, on a Sunday. I’m just sayin’….thanks again to all of you for making a fuss this past week – several times yesterday I felt like a bit of a rock star, such was the volume of cheering as I ran by. At least, I hope it was for me, because I was waving and smiling/grimacing at everyone.

So I ran the first half at lovely 5 min 10 sec kms, feeling good and strong and very  comfortable, as was the plan. Then I hit heartbreak hill and my heart broke. It’s a big hill! Kings Park was tough and I slowed down more than I would have liked, but as I was going through Subi I worked out how slowly I could go (if I had to) and still get across the line in under four hours. Armed with that information, I stopped worrying and really just focussed on getting to the end.

It’s impossible not to be inspired by the marathon – such a pinnacle of human achievement. A small part of me has always wanted to be a part of that group of people who’ve run a marathon; it’s a cool club to be in. To know that I’m capable of doing it. To know that I’ve done it. Throughout my training, I also wanted to know that I could make a plan work out after the Half IM plan this year went awry. I didn’t really tell that to anyone until I told TP after the race yesterday. I wanted to know that if sub 4 hours was the plan I could make it happen. And I did, so there’s a lot of happiness and a little bit of redemption tied up in yesterday’s run.

I’ll leave you with this quote from Fred Lebow, co-founder of the NY Marathon, because I couldn’t have said it better myself –

“The marathon is a charismatic event. It has everything. It has drama. It has competition. It has camaraderie. It has heroism. Every jogger can’t dream of being an Olympic champion, but he can dream of finishing a marathon.” 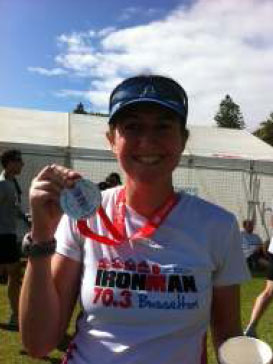